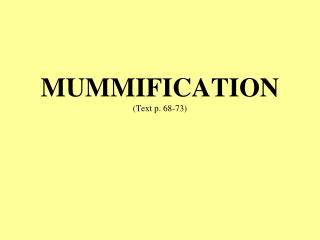 MUMMIFICATION (Text p. 68-73). Natural Mummification. The earliest ancient Egyptians buried their dead in small pits in the desert. The heat and dryness of the sand dehydrated the bodies quickly, creating lifelike and natural 'mummies'.

Do Now: What is Mummification? - Aim: why did the ancient egyptians mummify their dead?. a process to prepare a dead

Practical English, Book II - . unit 5 part a. my advice to students: get a sound, broad education. unit 5: part a. text a

Annotating Text - . the outsiders by s.e. hinton. what is annotating?. it is writing/marking a book to show your