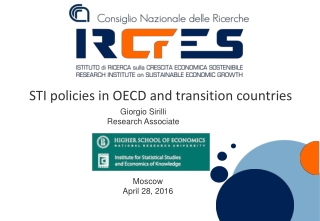 STI policies in OECD and transition countries. Giorgio Sirilli Research Associate. Moscow April 28, 2016. Outline of the presentation. The role of S&T in society S&T policy The challenges to S&T The impact of the crisis Evaluation of R&D The impact on higher education Transition Issues for Countries in Transition - . and a lesson from celtic folk legend“ a fo ben did bont ” george

Securitisation in the OECD countries Contents - . the first questionnaire. updated version the need for further

Environmental Fiscal Reform in OECD Countries - . presentation at the conference “the consolidation of governance and