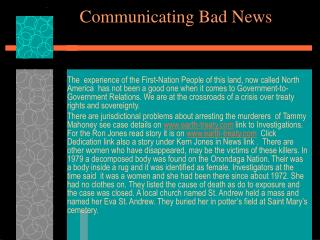 Communicating Bad News. The experience of the First-Nation People of this land, now called North America has not been a good one when it comes to Government-to- Government Relations. We are at the crossroads of a crisis over treaty rights and sovereignty.

Communicating Bad News - . our situation. ask if the person is ready to receive it ask how much they want to know state

Breaking Bad News - . breaking bad news. what do they know already? an understanding of their medical condition. the

Bad News Messages - . taking the sting out of criticism or negative news. use a buffer paragraph. when delivering “bad

Communication Management - . pmi knowledge areas . importance of good communications. a threat to many projects is a