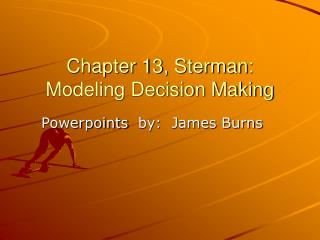 Chapter 12: Decision Making - . joel cooper university of utah. try it!. write your name on a piece of paper and indicate

Chapter 13 Decision-Making and Relevant Information - . differential costs and revenues bill is currently employed as a

Chapter 14 Decision Making - . applying probabilities to the decision-making process in the face of