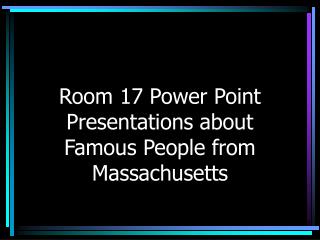 Famous people of Great Britain - . there are many famous people in great britain. the british people are very proud of

About the Presentations - . the presentations cover the objectives found in the opening of each chapter. all chapter

Conference Presentations - . steve wallace. the person who presents the research gets the credit. paul chu: first

Famous People - . i ’ m going to show you pictures of famous people. i want to find out if you know who they are. say

About the Presentations - . the presentations cover the objectives found in the opening of each chapter. all chapter

2d shape power point - . by evan and holly. rectangle. has four sides four sides are parralell it is a quadrilateral.

“Are people born wicked? Or is wickedness thrusted upon them?” - --- glinda. before dorothy came into the land of