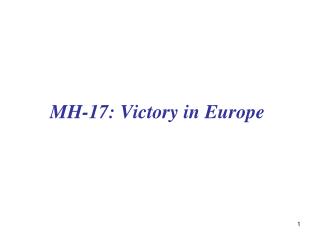 Preparing for Victory Day - Veterans prepare for victory day, the anniversary of the soviet union's victory over nazi

Melbourne Victory Song (words of song) - . made by patrick and olivia . oh melbourne hear the sound of drumming must be

29.4 Victory in Europe and the Pacific - . objective 1: summarize how the allies began to push back japan in the pacific.

The Vision For Victory - . in order to take the next step in cdm, we would like to move our ministry to make disciples

Digging for Victory - . a lesson for today ?. digging for victory. in 1946 the british population was at its healthiest .

Section 3: Victory in Europe and the Pacific - . allies turn the tide. nazis invaded soviet union but did not conquer it

Toward Victory - . by: catelyn and preston. victory in europe. stalin urged the americans and the british to open a

VICTORY IN JESUS - . created by dvm please share this file freely. he sought me, and bought me, with his redeeming blood.

TOWARD VICTORY - The allied effort to win world war ii. toward victory. ?? what you should know ??. 1.) strategy applied

Pump-Up - . how do you think the allies are able to win wwii?. allied victory. today’s vocabulary. d-day turning point

Victory - . on a hill your blood was spilled your brow, your hands, your feet with nails and thorns the veil was torn to