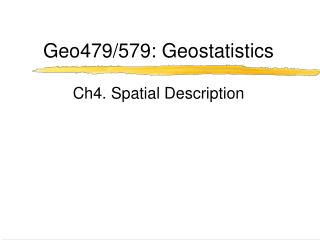 Geo479/579: Geostatistics Ch4. Spatial Description. Difference from Other Statistics. Geostatistics explicitly consider the spatial nature of the data: such as location of extreme values, spatial trend, and degree of spatial continuity

IT Outsourcing: Business Continuity by Design by OneNeck IT - Oneneck provides a comprehensive, flexible suite of it