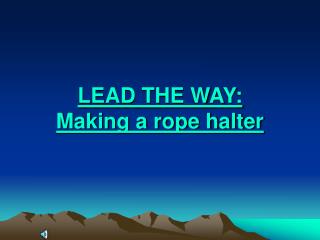 9. The Ones Who Walk Away from Omelas - . (edited) variations on a theme by william james ursula le guin. objectives of

A horse and two goats - . r.k. narayan. starter. write 3 questions for each of the following words, in which the word is PEDU 7206 Foundations of EAP - . topic 5 the systemic foundations of eap: the state and market. the context of eap:

Ropes and Knots - 9. ropes and knots. objectives (1 of 4). describe the differences between life safety rope and utility