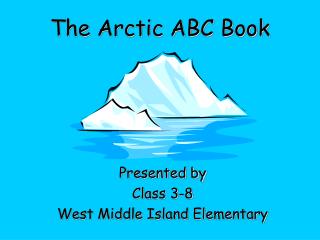 The Arctic ABC Book. Presented by Class 3-8 West Middle Island Elementary. A is for Alaska. Alaska has 17 of the tallest mountains in the United States. Alaska’s biggest industry is the forest industry. In Alaska, there are 3 million lakes. B is for Bears.

ABC Book - . written and illustrated by morgan smith and delaney shortridge. a is for amazing american girl. b is for

ABC Book - . a. abolitionism- the movement to end slavery . anti-federalist- support the ratification of the

ABC BOOK - . by: santos ontiveros. a. abrham lincoln: president of the united states during the civil war. battle of

ABC book - . by gavin, scott, and sam. a. apple blossom state flower. b. better made chips chips made in michigan. c.

ABC Book - . a. abolitionism- the movement to end slavery. anti-federalist- support the ratification of the constitution.

ABC China Book - . by makayla carr. a a is for aristocrats. aristocrats were rulers of land for a certain district or

Our ABC Book - . jennifer garrard. aa. alphie. alphie teaches the alphabet and the sounds. bb. books. we read books at