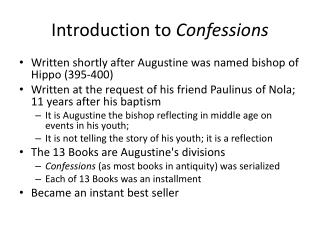 Introduction to Confessions. Written shortly after Augustine was named bishop of Hippo (395-400) Written at the request of his friend Paulinus of Nola; 11 years after his baptism It is Augustine the bishop reflecting in middle age on events in his youth;

The Book of Confessions - . book one of the constitution of the presbyterian church (usa) eleven creeds, confessions,

The True Confessions of Charlotte Doyle - . what might life be like living in a small, isolated fishing village?. the

CONFESSION - . by: bright and breezy group. the sacrament of confession. confession is one of the least understood of

BELIEVER IN A DARK TUNNEL The Confessions of Jeremiah - . lesson 5 resignation not an option jeremiah 20:7-18.

BELIEVER IN A DARK TUNNEL The Confessions of Jeremiah - . lesson 3 depression lashes out jeremiah 17:12-18. introduction

Interrogations and Confessions - . fifth amendment no person shall be … compelled in any criminal case to be a witness

Confessions of Saint Augustine of Hippo - . tim bouffard. st. augustine of hippo. born in the year 354 in what is now

Interrogations &amp; Confessions - . fifth amendment. “no person… shall be compelled in any criminal case to be a

Confessions a of a technophobe!! - . academic lead of a funded project to design a mooc as an introduction to the mba.

A CONFESSION OF SIN - “he who conceals his transgressions will not prosper, but he who confesses and forsakes them will

Confessions of an IT Poser - . tools, tricks, and tips to help achieve your distance education goals. jessie daniels