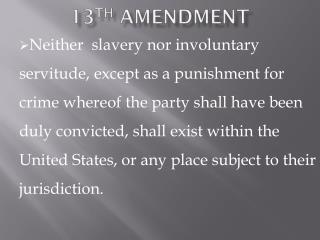 13 th Amendment. Neither slavery nor involuntary servitude, except as a punishment for crime whereof the party shall have been duly convicted, shall exist within the United States, or any place subject to their jurisdiction. Dred Scott v. Sandford, 1857.

THE ACCORDION OF THE THIRTEENTH AMENDMENT: ( QUASI-PERSONS AND) - The right of self-interest. lebovitz, 14 st. thomas l.

11 th through 27 th Amendments - . review/ reteach. what were the federalist papers? who were the authors? what was the

The 14 th Amendment - . how the supreme court and congress have interpreted and legislated re: the equal protection

The Civil War Amendments - . three additions to the constitution during reconstruction. the 13 th amendment (1865).

The 13th, 14th, and 15th Amendments - . a look at the reconstruction amendments ! . objective. by the end of the lesson,