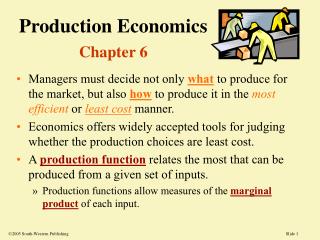 Production Economics Chapter 6. Managers must decide not only what to produce for the market, but also how to produce it in the most efficient or least cost manner. Economics offers widely accepted tools for judging whether the production choices are least cost.

The Costs of Production - . the law of supply : firms are willing to produce and sell a greater quantity of a good when

Managerial Economics in a Global Economy - . chapter 6 production theory and estimation. the production function with one

Chapter 6 The Theory and Estimation of Production - . chapter outline. the production function short-run analysis of

CHAPTER 6: ECONOMICS - . when you have completed this chapter, you will be able to: explain the concepts of scarcity and

CH. 6 – Economic Systems - . what do you know about economic systems?. think – pair – share grab a piece of paper

Chapter 18 The markets for the factors of production - . t1 the demand for labour t2 the supply of labour t3 equilibrium