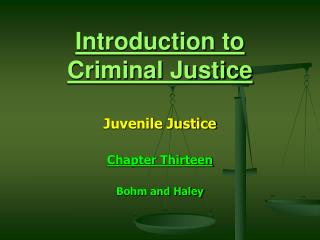 Introduction to Criminal Justice. Juvenile Justice Chapter Thirteen Bohm and Haley. Parens Patriae. The legal philosophy justifying state intervention in the lives of children when their parents are unable or unwilling to protect them. ( Ex parte Crouse – 1838).