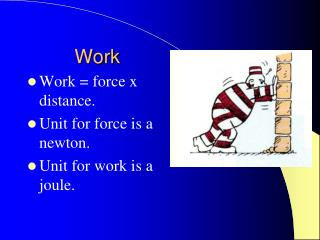 Work. Work = force x distance. Unit for force is a newton. Unit for work is a joule. Lever parts:. Where these things are will determine what type of lever it is. Fulcrum – pivot point that is attached to lever Load (resistance arm) Effort arm (force). 1 st class levers.

AT @ Work - . tools to accommodate employees with disabilities revised may 2009 by the pennsylvania assistive technology

What is work? - . in science, the word work has a different meaning than you may be familiar with. the scientific

Work Tests to Evaluate Cardiorespiratory Fitness - . objectives. identify the sequence of steps in the procedures for

Effective Group Work In The College Classroom - . debra dunlap runshe. webinar objectives. by the end of this webinar,

Work - . the power to create a new world. the meaning of work- overview. work and working are essential in human life the

Joy of Work - . pmg consultancy services hisar zone. work. “all the work is done by the ants do things-by tiny but

Theology of Work - . why a theology of work?. what is theology?. the word “theology” comes from two greek words, ( Working with the Work-Centered Analysis Framework - . elements of the work-centered analysis (wca) framework:. the

Work - . page 168 . what is work? . a little different from what we’re use to in our everyday lives when you hear the