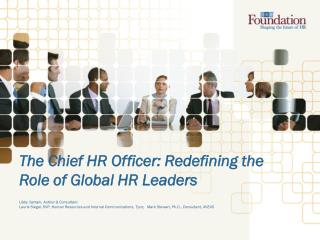 THE QUE GROUP WOULD LIKE TO THANK THE 2013 SPONSORS - . remote managed inventory – soup to nuts. paul stewart chief

Global Mindset ®: Why is it important for Global Leaders? - . mansour javidan, ph.d. dean of research and garvin

Theories of Practice: The Functions of the Chief Executive Officer - . mpa 8002 the structure and theory of human