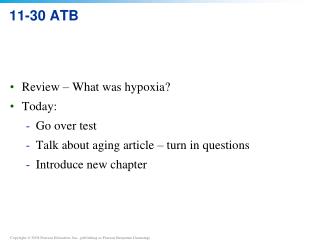 11-30 ATB. Review – What was hypoxia? Today: Go over test Talk about aging article – turn in questions Introduce new chapter. 12-1 ATB. What is dynamic equilibrium? Today: Systems ecology and feedback loops. This lecture will help you understand:. The nature of environmental systems 30 . 11 .2006 - Innovative, interactive methods in education of foregin languages by internet experience of providing the

Hebrews 11:30 - . “ by faith the walls of jericho fell down after they had been encircled for seven days. ”. joshua

3-1 ATB - . what is desertification? today: discuss the presentations you will create over the next three days. soil