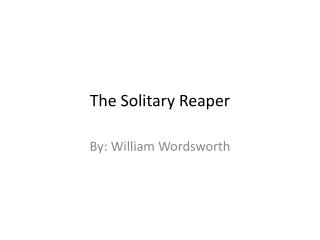 The Solitary Reaper. By: William Wordsworth. Romanticism. Reaction to French Revolution and its failure to achieve high ideals Reaction to Industrialization and Urbanization Reaction to Enlightenment and 18 th C aristocratic values Reaction to materialism of the age

I Wandered Lonely as a Cloud by William Wordsworth - . feature menu. introducing the poem literary focus: rhythm and

Biography - . biography. born in cockermouth, cumberland, in the lake district of northwestern england on april 7, 1770

Reaper - . what is the reaper. the reaper is a old plan that help with farming and other good uses. like harvesting

THE SOLITARY REAPER - . william wordsworth. about the poet. era – april 1770 -1850 born in cockermouth , cumberland in

William Wordsworth - Memory &amp; inspiration. william wordsworth. “and as i mounted up the hill the music in my

William Wordsworth - . a romantic poet. “i wandered lonely as a cloud” “composed upon westminster bridge”. sammi

The Solitary Wave of Translation (Edinburgh, 1834)

Wordsworth’s “Preface to Lyrical Ballads” and “Tintern Abbey” - . engl 203 dr. fike. reminder. i have your

How To Get Finest Compact Tractor’s Attached Reaper? - Reaper manufacturers understand all the difficult conditions and