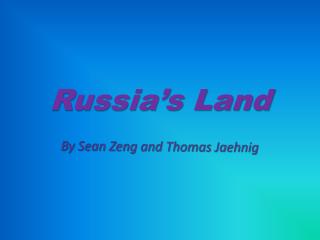 Mother Russia - . the feminine roots of russia. russia is inherently close to the earth because of its long-standing

Russia essay 5 - . reasons for bolshevik success. reasons 2: they were popular!. lenin returned to russia announcing the

Russia and the Eurasian Republics - . 1.1 physical geography. russia and the eurasia republics make up 1/6 th of the land

Russia and the Republics = 1/6 of earth’s land surface Three times the size of the U.S . - Eastern europe and russia.

RUSSIA - . description of russia. russia, the largest country in the world! russia's landscape and natural resources are