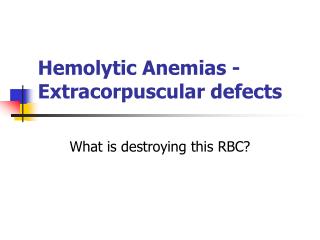 Hemolytic Anemias due to Other Intracorpuscular Defects - . what is intrinsically wrong with this rbc?. other

Hemolysis: premature destruction of the red cells - Rbc normally survive 90 to 120 days in the circulation. kind of

ANEMIAS OF DIMINISHED ERYTHROPOIESIS - . includes anemias that are caused by : 1- inadequate dietary supply of

Diagnosis Of A Case Of Anemia - . prof sameh shamaa prof of medical oncology and internal medicine mansoura faculty of

Hemolytic Anemias - . defined as those anemias result from an increased in the rate of red cell destruction. the red cell