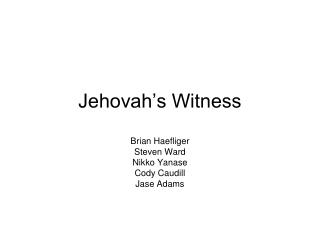 Jehovah’s Witness. Brian Haefliger Steven Ward Nikko Yanase Cody Caudill Jase Adams. There are five important facts to remember about the Jehovah's Witnesses and the Watchtower Organization. 1. They have accepted the Organization as the Prophet of God. DIRECT EXAMINATION - . telling your story through the witness. purpose of direct examination. credibility of the lawyer

Imagination - . “then said he unto me, son of man, hast thou seen what the elders of the house of israel do in the

The Jehovah’s Witness Church - . must be in the church belonging to jesus to be saved. ephesians 5:23, ephesians

Jehovah’s Witnesses - . beliefs , customs , spread in the us and the world, situation in germany &amp; the

My Life - . by karla hernandez. born in anaheim, california full mexican had 2 shih-tzu’s for more than half of my life

A Witness of Two John 8:12-18 - . three lines of attack law of the witness an expert witness an impartial witness the

An Examination of The Jehovah’s Witnesses - . by prof. dennis m. swanson the master’s seminary. importance of this

Jehovah’s Witnesses - . and their refusal of blood transfusions in the 21 st century. eu. who/what are jehovah’s

An Examination of The Jehovah’s Witnesses - . overview. the jehovah’s witnesses have over 6 million followers in 234