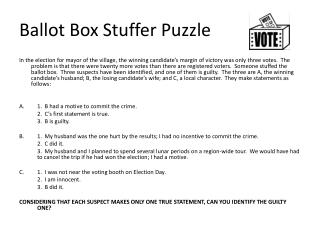 Ballot Issues You Will Love - . many ballot initiatives an expensive autumn for colorado businesses. right to work.

Puzzle A - . puzzle b. which shape is heaviest?. cross out 9 letters, so that the remaining letters (still in order) form

How to complete a Sudoku puzzle - . michelle crabill http://www.fcps.edu/kingsparkes/technology/sudoku/index.htm. this

Puzzle Menu - . select the puzzle you would like to play!. puzzle 2. puzzle 1. don’t touch the green! get your mouse

Eternity Puzzle - . the eternity puzzle was launched in 1999, selling for approx £35, with the lure of a stg£1m prize