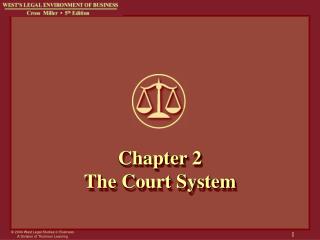 Chapter 2 The Court System. §1: The Judiciary’s Role in American Government. Judicial Review was established in Marbury v. Madison (1803): “It is emphatically the province and duty of the Judicial Department to say what the law is….”

The American Legal System and the Courts - . chapter 10. in this chapter we will learn about. the notion of law and the

The Federal Court System - . warm up…. what is the job of the judiciary branch? list as many as you can: what issues

The Court System and Legal Rights - . chapter one. i. introduction. a. the united states is a nation governed by laws. 1.

The Court System - . when a crime has been recorded and a suspect apprehended and booked  it creates a criminal case

The Federal Courts - . chapter 16. the nature of the judicial system. introduction: two types of cases: criminal law: the

CHAPTER 16 Ignition System Components and Operation - . objectives. after studying chapter 16, the reader will be able