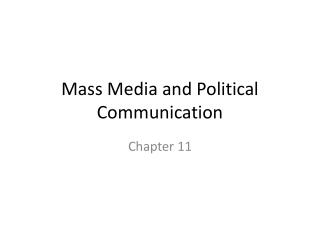 Mass Media and Political Communication. Chapter 11. Why is political communication important? Through which media outlets do you read/learn about daily politics? (What is your major source of information?) How and when did the mass media emerge? When was the first newspaper published?.

The Mass Media - . a.p. government/politics lecture. objective:. what role does the mass media play in our understanding

The Mass Media and the Political Agenda - . chapter 7. edwards, wattenberg, and lineberry government in america: people,

Influence of the Media on Politics - . media is known as the &quot;fourth branch of government&quot; what gives

COM 517 COMMUNICATION IN POLITICS Media Effects - . media effects and political communication: the impact of media on

The Mass Media and the Political Agenda - . chapter 7. high-tech politics. politics that are shaped by technology. mass

MEDIA AND POLITICS - . “do you folks know the difference between a horse race and a political campaign? in a horse

Politics in America. The Mass Media - “media are extensions of human beings and affect our outlook and attitudes, our

The Media and Politics - . politics in the age of mass media. media and elections. politicians and media have a symbiotic