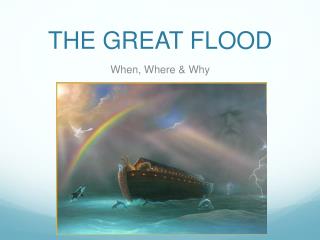 The Great Flood of 1966 - . florence, italy. the event, nov 3rd. it was the day before armed forces day, a public holiday

Great Flood and Rock - What details are told by a map about the great flood ?. great flood and rock. address for

The Flood - . genesis 6. think. do you believe the “stories” in the bible ?. have you ever met someone who didn’t

“The Flood” - . sequence of key events how does an author introduce a key event? how does a writer illustrate a key

The Flood - . total truth or tall tale?. evidence for the global flood of the bible. some object to the flood on the

The Flood - . david plaisted. giants. in the antiquities of the jews, v:2:3, the historian josephus gives some

The Flood - . it started with a drip. then the sink was overflowing. then the kitchen. then the street. then the whole

The Flood - . the flood. read genesis 6:1-7 why did the lord judge the earth with the flood? sons of god mingled with the

The Genesis Flood - . fact or fiction?. the biblical account. the cause:. the wickedness of