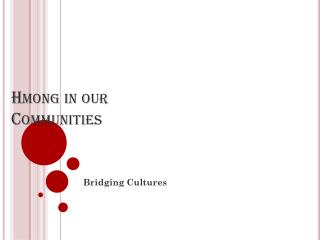 Hmong in our Communities Hmong in our Communities. Bridging Cultures. Hmong Cultural Center. The Hmong resource Center offers a variety of programs for Hmong in the community. Offers information to educate about the Hmong people. Cher Vue (Graduate of metropolitan state, law enforcement)

Hmong in our Communities

Introduction to Health Science - . 1.04 diverse patients. learning log. name all the different types of cultures in

Healthcare Needs of the Hmong: Following Through an Example - . ilean her executive director council on asian-pacific

The Hmong - . a case study in cultural resiliency . tonight!. where are the hmong? what’s their background? what is