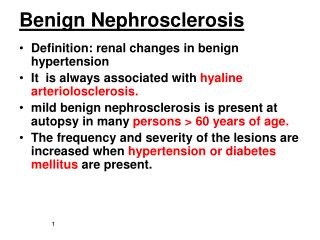 Benign Nephrosclerosis. Definition: renal changes in benign hypertension It is always associated with hyaline arteriolosclerosis. mild benign nephrosclerosis is present at autopsy in many persons > 60 years of age. Benign Biogeography - The study of the distribution of biodiversity over space and time. it aims to reveal where

Benign Prostatic Hyperplasia - . objectives. upon completion of this cme activity, the learner will be able to:

Benign oesophageal disease - 10-30% of patients with suspected angina don't have coronary disease.from these 50% will