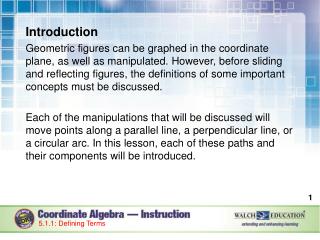 Introduction Geometric figures can be graphed in the coordinate plane, as well as manipulated. However, before sliding and reflecting figures, the definitions of some important concepts must be discussed. Introduction to Investment - . bruce viney director of training and client services. why we are here…. exam (syllabus

Introduction to ActiveMQ - . prepared for the austin java users group by gerald cantor. introduction activemq and