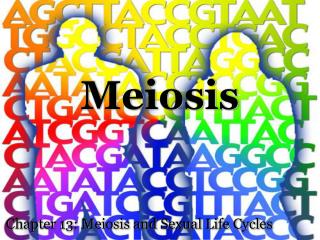 Meiosis. Chapter 13: Meiosis and Sexual Life Cycles. Variation. Living organisms are distinguished by their ability to reproduce their own kind Genetics is the scientific study of heredity and variation Heredity is the transmission of traits from one generation to the next

Meiosis - . formation of sex cells. meiosis. a process of reduction division in which the number of chromosomes per cell

Meiosis - . dr ahmad o babalghith. meiosis. meiosis is the process of nuclear division which occurs during the final

Meiosis - . or reduction division. what is the difference between mitosis and meiosis. mitosis. meiosis. occurs in gonads

Meiosis - . meiosis is a reduction division of a diploid nucleus to form haploid nuclei. occurs in reproductive organs

Meiosis - Chapter 7.1. meiosis. benagh. difference between meiosis and mitosis!. you need to understand the difference

What is Meiosis? - . - cell division to form sex cells where the offspring inherits genes from both parents. what are

Meiosis - . vocab heredity – the passing of traits/genes from one generation to the next genetics – the study of

MEIOSIS! - . what is meiosis?. we know what mitosis is meiosis: a two-part cell division process used in sexually

MEIOSIS - . meiosis. the form of cell division by which gametes, with half the number of chromosomes, are produced.

MEIOSIS - . sperm &amp; eggs &amp; variation..oh my!. sexual reproduction requires cells made by meiosis. what if