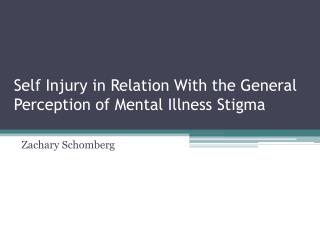 Self Injury in Relation With the General Perception of Mental Illness Stigma. Zachary Schomberg. Abstract.

Perception - . it’s not as easy as it looks. sensation and perception. sensation the process through which the senses

Sensation and perception - . sensory psychology. how we know about the world general principles transduction receptors

Childbirth at Risk - . the perinatal and intrapartal period. describe the mental illness that women are at greatest risk

Federal Agency Injury and Illness Recordkeeping and Reporting Requirements - . objective. this presentation is an