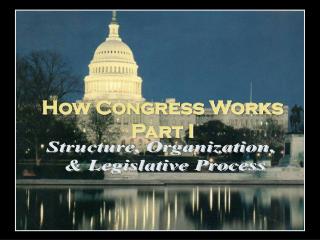 How Congress Works Part I How Congress Works Part I. Structure, Organization, & Legislative Process. Who’s in Congress?. What are the factors that influence how a member of Congress Vote on Legislation? . Personal Beliefs Constituent Interests Interest Groups - Political Action Committees (PACs)

How Congress Works Part I

Answer this question - . should congress reflect the will of the people? or should they pay attention to their own points