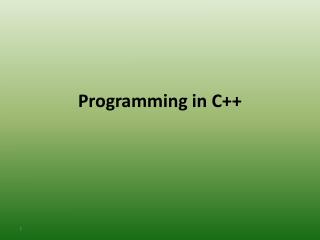 C Programming - . program quality some of the material in these slide is adapted from chapters 5 and 6 of “code

CIS 1057 Computer Programming in C - . dr. anwar mamat fall 2013 acknowledgement: many slides based on/ borrowed from

Socket Programming in C - . slides adapted on j örn altmann‘s slides. questions that will be addressed. what