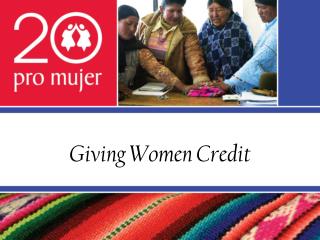 Giving Women Credit. Mission of Pro Mujer. Pro Mujer is a women's development organization that provides poor women in Latin America with the means to build livelihoods for themselves and futures for their families through microfinance, business training, and healthcare support. .

Debit Card : Women's Credit Card - How to Be One Step Ahead Of Credit Card Companies - Some of the known credit card Mishkat Al Moumin, PhD. Founder and CEO of Women and the Environment Organization - The role of environmental services in

Barriers and Enablers of Women in Business in Botswana - Makepe p.m; okurut f.n; montsi k and oageng i. barriers and

Giving Honor to the Deserving - &quot;many women do noble things, but you surpass them all. charm is deceptive, and

Women in Business - . julie harris-burland. the agenda:. why women? facts &amp; figures what are we doing? internal

When the Honeymoon’s Over Unite - Part 1 - . leave…unite. genesis 2:24 this explains why a man leaves his father and

GIVING CREDIT TO OUTSIDE SOURCES - . using the modern language association (mla) style to document a research paper. when

Credit - . what is credit?. credit is the opportunity to get something now and pay for it later. how you use credit is