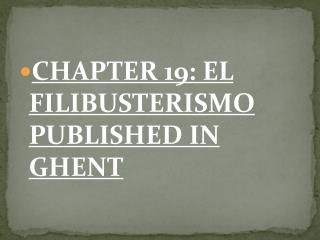 CHAPTER 19: EL FILIBUSTERISMO PUBLISHED IN GHENT. Valentin Ventura. REASONS FOR MOVING IN GHENT. Cost of printing in Ghent was cheaper than in Brussels To escape from the enticing attraction of Petite Suzanne He pawned his jewels

Hartford Convention and the Treaty of Ghent - . the hartford convention. federalists met in hartford, connecticut, dec

THE FIRST MIRACLE John 2:1-12 By Becky Kew Published at www.GospelHall.org - . the lord jesus called 12 disciples to be

Chapter 3 Preparation of Financial Statements - . objectives. by the end of this chapter, you should be able to: