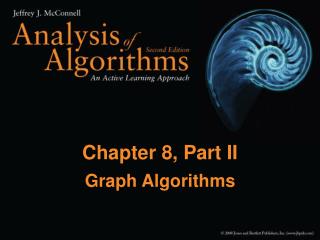 Chapter 8, Part II. Graph Algorithms. Minimum Spanning Tree. The minimum spanning tree (MST) of a weighted connected graph is a subgraph that contains all of the nodes of the original graph and a subset of the edges so that: The subgraph is connected

Chapters 7 and 8 (Part II) - . objective of this lecture learn about how to explain the differences in growth performance

CHAPTERS IN ECONOMIC POLICY Part. II Unit 8 The dynamics of debt to GDP ratio - . the arithmetic of deficits and debt.

Chapter 8: The Reluctant Fundamentalist - . add to vocab section: quantifiable – countable/able to be calculated

Chapter 8: Linear Regression—Part A - . a.p. statistics. linear model. making a scatterplot allows you to describe the