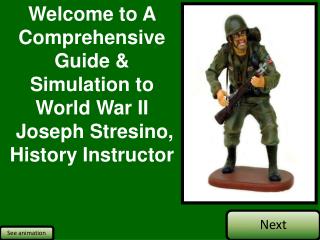 Welcome to A Comprehensive Guide & Simulation to World War II Joseph Stresino, History Instructor. Next. See animation. Objective: After this lesson, you will understand America's role in World War II by completing the simulation & taking a quiz. HDL Co-Simulation - . objectives. after completing this module, you will be able to:. identify the blocks necessary for

The Comprehensive Conservation and Management Plan for Clearwater Harbor and St. Joseph Sound - . to conserve our

Research in Support of Simulation - . by: peter knepp and mike murphy. what is simulation?. a simulation is a form of

The Inner World As a Consequence of Behavioural and Perceptual Simulation - Faculty of medicine lund university. the

Guide to Pitching a Stock Joseph S. Burkhart David M. Khtikian - . this tutorial was prepared as a final project for