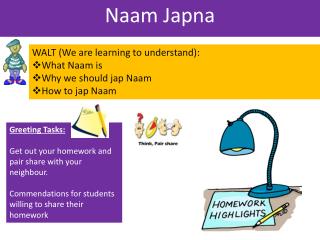 Naam Japna. WALT (We are learning to understand): What Naam is Why we should jap Naam How to jap Naam. Greeting Tasks: Get out your homework and pair share with your neighbour. Commendations for students willing to share their homework. Say: a A e s h Do: R R L B L MY Dream vacation IN JAPNA - . the state of japan is made up of several islands and island number 4000 the number of