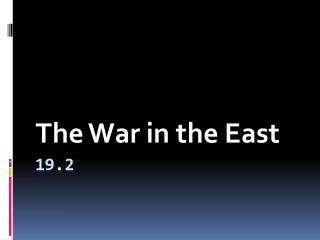 The War in the East. 19.2. Learning Target #1. Identify the battles that the Confederates won in Virginia and analyze why they were important. 1 st Battle of Bull Run. First battle of the war July 1861 North realized after this battle that the war would not be easy or end quickly. Section 19.2 - . meat selection and storage. types of meat. beef from cattle over one year old. has a hearty flavor. the

Chemistry 19.2 - . 19.2. ion product constant for water. for aqueous solutions, the product of the hydrogen-ion

19.2 Pythagorean Theorem - . a right triangle is a triangle that has a right (90 degree) angle. the 2 sides that form the

Section 19.2 Assessment - . 12. an acid is highly ionized in aqueous solution. is the acid strong or weak? explain your

19.2 Multiple Alleles - . in a population, there may be more than two alleles for a given trait if a gene exists in more

Chapter 19.2 The Sun - . &quot;the sun, with all those planets revolving around it and dependent on it, can still