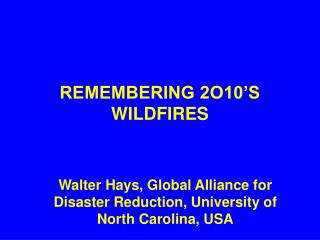 Wildfires - . by: emily norton. what is a wildfire?. a wildfire is a fire that starts in the wild. by the simplest things

Remembering Who I Am &amp; What I’m Here For - . the most important part of a principals job description. who we

Catastrophic Events - . wildfires. how it forms: lightning – 1 out of 5 wildfires start this way campfires cigarettes

Wildfires - . the wildfires. ¿ w hat is a wildfire ? a wildfire is an uncontrolled fire in an area of combistible

Natural Catastrophes - . wildfires. lightning strikes cause one out of every five wildfires. drought conditions, wind,

REMEMBERING: THE ROLE OF THE CUE - . remembering as “ecphory” a synthesis of engram, current state, and retrieval cue

Warning Cigarettes Cause Wildfires - . designing products to help protect our environment while saving you money.