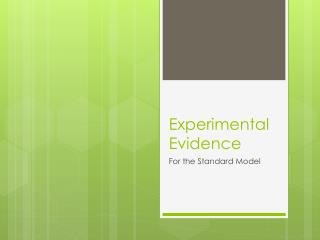 Experimental Evidence. For the Standard Model. The Ω - particle. As we have learned (and done), Gell-Mann categorized by spin. The spin-3/2 baryons were then sorted by charge and strangeness. The geometry showed him (and you) that there was a missing, yet to be discovered particle.