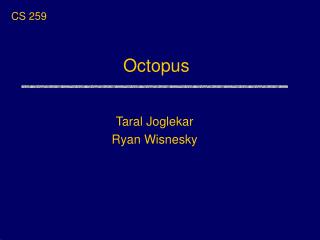 Octopus - . by daniel l. animal family. octopuses move from place to place. why? it’s because if they stay in one place

OCTOPUS - . if you look inside the purple outline you will see a camouflaged octopus . facts. the octopus can

Octopus - . by iris. do octopus have bones. no they do not need bones in fact if they had them they would be totally

OCTOPUS - . description . massive bulbous head, large eyes, and eight distinctive arms. most unique about them is their

THE OCTOPUS - . by: lisa maria knapp. diagram of an octopus. here you have a figure of an octopus and shows its body

THE OCTOPUS - . how do octopus give birth?. octopuses lay eggs. the mother octopus continuously blows a current of water

Mimic Octopus - . by kaitlyn nasatka &amp; logan b ananto. habitat and behavior. mimic octopuses have been know to

Blue Ring Octopus - . by: scott dinan josh stoll. summary. the blue ringed octopus is found in the pacific ocean. it is a

The Octopus Toolset: - . a framework for model-driven design-space exploration. octopus toolset in short. a plugin -based