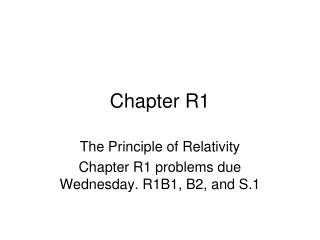 Chapter R1. The Principle of Relativity Chapter R1 problems due Wednesday. R1B1, B2, and S.1. Introduction. If you wish to see your final exams from first semester, you may come to my office. The exams stay with me. Second semester (approximately) 2 weeks of relativity (Unit R)