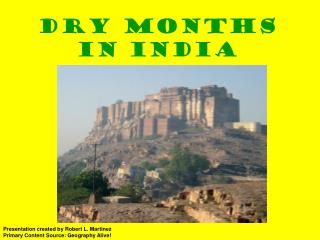 Dry Months in India. Presentation created by Robert L. Martinez Primary Content Source: Geography Alive!. The Mehrangarh Fort rises out of the desert like a towering giant, looking down on the “Blue City” of Jodhpur, India. Meats - . chapter 6. meat. meat is the muscle of animals it is composed of muscle fibers, connective tissue and fatty

Our snuggle bug at 3 months - . you did it daddy!. troy’s most favorite place in the world. the tevelson’s in magic