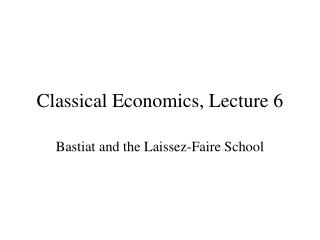 Classical Economics, Lecture 6. Bastiat and the Laissez-Faire School. Two Themes. This chapter has a discussion of a lot of people, but two central themes tie the chapter together.

Economics D10-1: Lecture 6 - . the envelope theorem, duality, and consumer theory: a one line proof of the slutsky Utilitarianism and Classical Economics - . utilitarian ethical theory has sources in greek and roman philosophy and in

Classical Regression - . lecture 8. today’s plan. for the next few lectures we’ll be talking about the classical

Lecture № 1 1 - . the most important derivatives of the fivemember heterocyclic compounds with one heteroatom.

Preview of lectures 1-15 - . introduction course objective to introduce mpa students to advance level of issues in

Economics of Production - . introduction. today we will discuss how input-output relationships are necessary to 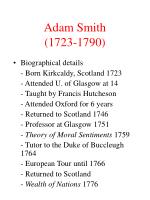