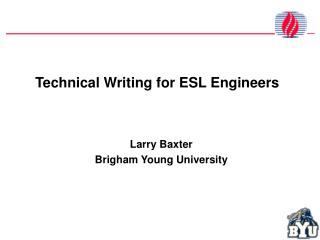 Technical Writing for ESL Engineers . Larry Baxter Brigham Young University. Helping verbs Two types Modal – do not change tense (can, could, may, might, must shall, should, will, would, ought to) do, have, be – sometimes change tense do, does, did have, has, had Writing activities for beginning ESL students - . jodi versaw jversaw@iecminnesota.org. what do you remember about

Technical Writing - . guidelines. general issues. why a lecture about writing?. surely, any literate can write. why