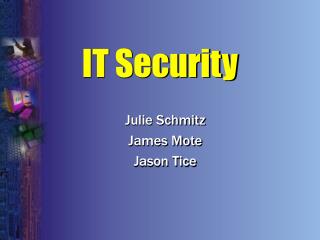 IT Security - Information technology security aims at guarding networks, data, computers and programs used in an

IT Security 2004 - Escalating and evolving requirements. regulations and guidance are changing at an increasing

IT Computer Security - . www.kait.ca. why security is important. keeps data and equipment functioning lack of

IT security Redding - Are you searching for best it support company in redding? we are leading it services and it

IT security management - Our vital security service features are designed to keep you safe, so that you can stop worrying

SECURITY in IT - . ~shikhar agarwal. definition. computer security is a branch of computer science that addresses

IT Security Readings - . a summary of management's role in information security in a cyber economy and the myth of secure

IT Security Fundamentals - . cybersecurity primer for individuals. about community it. advancing mission through the