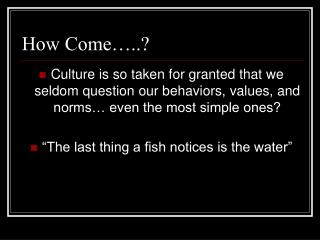 How Come…..?. Culture is so taken for granted that we seldom question our behaviors, values, and norms… even the most simple ones? “The last thing a fish notices is the water”. CULTURE. How come…….. When you’re driving down the road….. When someone comes behind you…..