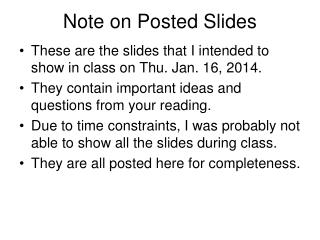 Note on Posted Slides. These are the slides that I intended to show in class on Thu. Jan. 16, 2014. They contain important ideas and questions from your reading. Due to time constraints, I was probably not able to show all the slides during class.

NOTE TO GROUP: Delete After Reading - . your group’s final presentation must include the following: 7 facebook pages,

Please Note: - . this session did not run at the network event. however, if you are interested in finding out more,

Titanic Vocabulary Slides - . this ship is bigger than that iceberg!. where can people see a shipwreck ?. how is wreckage Water Slides For Sale Commercial - Visit this site http://tentandtable.net/inflatables/inflatable-slides/water-slides for

Slides at … tompeters - Note : to appreciate this presentation [and insure that it is not a mess ], you need microsoft