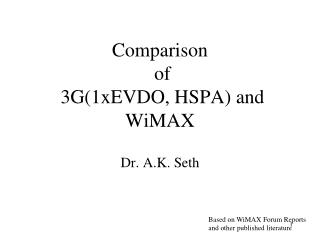 Comparison of 3G(1xEVDO, HSPA) and WiMAX Comparison of 3G(1xEVDO, HSPA) and WiMAX

HSPA Reading Passage and Strategies - . there are two kinds of passages that will be used on the hspa: narrative

New Jersey HSPA Language Arts - . the hspa is an exam administered statewide in march to high school juniors. it is

HSPA - . ‘twas the night before testing. go to bed on time. put a few no. 2 pencils with erasers in your backpack. talk

HSPA Basics - . everything you need to know about the test before you take it!. mrs. edge. general hspa. stands for high

What is WIMAX ? - . wimax is an ip based, wireless broadband access technology that provides performance similar to

UMTS based on WCDMA - . introduction. analogue mobile systems are commonly referred to as “first generation” (e.g.