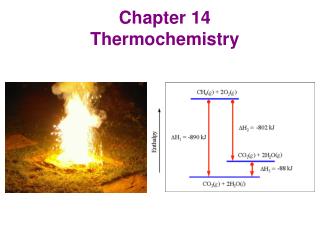 Chapter 14 Thermochemistry. OBJECTIVES: students will be able to understand…. Concept of energy and its various forms Relationship btwn energy, work, and heat The key features of a state function How to use Hess’s law & thermochemical cycles to calculate enthalpy D ’s of chem rxtns

Ch. 6 Thermochemistry - . the relationship between chemistry and energy basic concept of thermodynamics energy

Chapter 9 Energy, Enthalpy and Thermochemistry - . the study of energy and its interconversions is called thermodynamics

The Three Laws of Thermochemistry - . energy can be changed but not created or destroyed. entropy increases for a

Enthalpy - . calorimetry of chemistry. reaction energies. in our earlier discussions of calorimetry, we used physical

Chapter 14 Thermodynamics PART 2 - . standard conditions. the standard state = state of a material at a defined set of