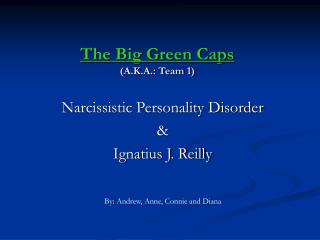 The Big Green Caps (A.K.A.: Team 1). Narcissistic Personality Disorder & Ignatius J. Reilly. By: Andrew, Anne, Connie and Diana. Narcissism. Greek Myth. Narcissus was beautiful and told he would live long if he did not look at himself.

Largest Selection of Men's hats & caps | Beanies ,Trilby & baseball caps - Top off your look with our range of

CLIMATE CHANGE IS REAL - . polar bears discussing global w arming. the green team. these students are some of the members

Go Green The RCB way - . praveen- rc for life. agenda. rcb and go-green ideas rcb players and go-green what is in it for

Green team - . insert your logo. school zone . “nature has perfections to show that she is the image of good” .